This is how it plays out in my mind. An alarm sounds in a dark bedroom in Sydney and a figure stirs. He is somewhere good, maybe Balmain 20 years ago.  A few hours click over and he sits on a train, a sports bag of cement at his feet. He looks tired and cool. The screen splits.  An affable character with a mop of blond curls is waiting for him at the other end.  Southern Cross station bangs out masses of commuters and to the sound of trains braking, He emerges. They smile and greet. Flash forward and a boot whooshes shut. Feet shuffle, there is muffled laughter, and car doors slam. Off they go. Will Coles. Melbourne 2012.

What actually transpired I don't know, but I awoke one average day to a Fitzroy that had literally been bombed to within an inch of its then waning life.  I raced to get the images up.  Damn it, Lorraine beat me to it!  Oh and salt to the wounds, Dean was with him! Oh Lord, I have to interview this guy..... And then it happened.  I had somehow scored an interview.  Well, of sorts, an 'interviewie thingy'.  Will Coles.  WillF*&cking Coles.  Agreed to be interviewed.  By Me!!! Here is what he had to say...

FF: You whacked me to attention a few years back with a bombing in Fitzroy’s laneways that was both prolific and awesome. Tell me about Melbourne and your early visitations.

Early visits to Melbourne were a revelation. There’s a sort of acceptance in Melby that’s lacking in Sydney, there’s the usual Graff vs. Street Art bollocks but that’s the same anywhere, like the Legal vs. Illegal wall shite. In Sydney there is a desperate craving for that Melbourne ‘cool’, like their recently opening small bars but rather missing the point of what makes them work so well down south i.e. low-fi comfy. City of Sydney council even does a ‘laneways’ but not with real street artists, just council-commissioned graphic designers & gallery rep’d artists in search of some cred. It’s something that needs to happen naturally, organically, & seems to in Melbourne. It can’t be forced, like it often is in Sydney. 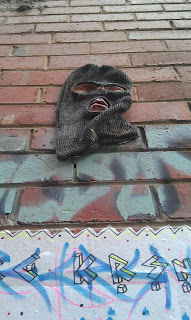 When I first arrived in your town I was just randomly gluing stuff down all over & just soaking up the vibe. Over the next few weeks I got a great response on Flickr & blogs including some classic ‘reviews’ (“faggy & unimaginative”!)

FF: You work large scale and small, with a medium as heavy as hell. Tell me a little bit about conquering such an industrial substance as concrete.

My Grandpa was a professional sculptor & taught me how to cast in cement, a ‘poor man’s bronze’. It seems to be the natural choice for an urban setting. Resins & plastics seem too slick, too corporate, bronze reeks of officialdom & council-inflicted art. Cement is the same as the buildings, roads & pavements. It ages, discolours & grows old with its surroundings, if you let it.

Even though I use a harder French cement (‘ciment fondu’) it’s still so cheap & fast to turn out fifty or more small sculptures. Tip: don’t use quick-set cement, it’s fragile salt-ridden junk!

FF: You pair words and objects, layered with meaning and dripping in symbolism.  How do your ideas evolve?

My ideas grow out of messages, or are really messages condensed down to a word on an object. I try to create a metaphor by turning a common easily recognised item into a meaning by adding a word, hopefully the right word. Sometimes I find the object & it’ll sit there bugging me for a year or more, other times it just clicks.

I do loads of small works, some fail, some succeed but I put them out there to an audience that can love or hate them.

There was a Scottish sculptor named Ian Hamilton Finlay that worked in a similar way, texts & imagery carved in stone. But all my works have a meaning that I’m trying to convey, to get the viewer to think about, or at least just think. We have so much untapped potential that is killed off pretty young in people that are told to just knuckle down, get a nine-to-five job, a mortgage, start breeding & work towards retirement. So keep thinking.

FF: You have an incredible body of work.  I literally have not seen a piece I did not love.  What makes you burst with pride?

Thanks! I’m in that ‘street art’ category which often elicits an art snob response from art establishment types, which shows their ignorance & their cowardice in fearing art not yet given the seal of approval by galleries. I’ve had some people love my work, mistaking it for other established artists, but then go off it when they realise it’s by a lowly sculptor like me! I had a certain art magazine refuse to ever review my work or shows despite buying a large sculpture by me for their foyer (they didn’t make the connection.) They even spent half a review of an established sculptor praising his concrete street installations, all mine!

Graff & street art (often bundled together) is looked down on as not ‘proper’ art despite their exaggerated love for Haring & Basquiat & that it’s imagery has its roots in Pop Art & political art from 1930’s to the present day (Peter Kennard, 1960’s French students, 1950’s Eastern European, 1930’s Spanish Civil War, etc etc etc.)

I’ve been shortlisted for loads of art prizes but have never won once. I guess I’m happiest when other artists like my work, especially those whose art I really rate. Or when I hear random people talk about my work, that they get a buzz out of it or talk about it.

FF: Nihilist Archaeology, has me thinking about how truly awful capitalist democracies are, and just that whole thing of multi-nationals, work horses and consumerism. What were the guts of that show?

Capitalism is a weird one, an ultimately self-defeating system, especially our consumerist- driven brand. It requires each product to have a shorter shelf life than the last, either by built in obsolescence (built to fail within a few years & be too expensive to fix) or by peer pressure (iPhone, say no more!) It requires a constantly growing customer base, infinite access to cheap resources & an ever shrinking workforce. Any logical reading of this makes you realise this is impossible on a finite planet with finite resources.

We need a new way of life but the corporations will not allow any deviation from their current profit-driven existence, profit at any cost to the planet. When you realise that most wars, small & large, are simply started to increase the wealth of certain people it’s difficult not to be disgusted by the speed at which governments will invade a country for a share in the spoils, much like the now despised empires of old.

Sorry, you got me started, I’ll stop!
FF: I am from half Glaswegian roots and you spent time in Glasgow many moons ago, which of course makes me tear up with unsubstantiated pride. Have you done any work in Glasgow?

I went back to Glasgow a few years ago & was saddened by how the yuppie cancer had spread. Areas that had strength of character are now a depressingly narrow (minded) demographic of dull types that kill culture of an area, like the old student area of Hillhead. I see the same shit every time I go to Fitzroy, just slower. Newtown here died a long time ago. (Note from Flasher - I hear you!)

I love that in Glasgow that you can see the hills of the countryside from the city, that the real country isn’t faraway & that whiskey is maturing in sheds hidden  all over the Highlands, like in ‘The Little Prince’ when he says “. "What makes the desert beautiful is that somewhere it hides a well”.

Real Glasgow is harder, more bullshit-free but with occasional dashes of extreme violence, like a lot of British cities! It is to Edinburgh what Melbourne is to Sydney. J

FF: Is there any hope I can hang on for a Melbourne show?

Fuck yeah! One way or another I hope to get a show in Melbourne next year (2013). I stopped fronting up to galleries in Melby last time I was there & just chilled with artists & collectives like Doyle, Junky, Dean & Blender. I had way more fun & got to glue up/down about five milk crates of new & old works mostly over Brunswick, Fitzroy & the CBD. 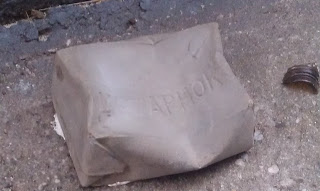 Yes, you can have mine if I can have yours!