Anonymity and other self reflections

This post cannot be so pedestrian as to begin with apologies for an absence over the past few weeks. Actually there it is being exactly that. So why the absence? After about two weeks I kidded myself I was experimenting and wanted to know how long it would take for the traffic to my site to trickle to nothing. The nice news for me is that it didnt happen - aside from a dip, people are still finding and reading me, so thanks! I will be around more I promise!! But seriously I have been away cos i have been grappling with that beast called who the fuck am I ? You know that inner question mark that wonders what social media has done to who people are. Now that is a post I won't waste on this hasty night time entry... If I could work out how to post pics from an iPad I would. Instead I will make announcements....the most exciting being that Sprucie is back!!! You must recall my adoration for Vandal Spruce. Well he has an exhibition. Yay !!! Anonymity, May 3rd -6th 222 johnston st collingwood. There are event links but there was a venue and date change so best place to find info is Facebook. Alright, enough until I have photographs at my disposal....
Posted by Unknown No comments:

Black Mark's Women of Paste stirred Facebook debate about gender, identity and assumption.  I was willing my 'smart' phone to load the bloody notifications faster. For those who haven't followed the Fb thread, the comments on his post are equally compelling.  I can't fully articulate a position on the 'gendering' of street art because my position shifts daily and I would probably disagree with myself tomorrow.  I can't speak with authority about the history of women in street art either, but recommend Googling it and reading Street Girls: The rise of Female Street Art in Cat Fight Magazine.

In Fitzroy in my experience that admittedly commences in the 00's street artists have invariably bombed in waves.  Their methodology for the most part tends to be a combination of tagging, pasting, throw ups and pieces.  Capping and slicing is generally par for the course and as people know, right now, this a bit of a contentious issue. Gender calls are hard to make without making assumptions, and assumptions are impossible to uphold given that they rely on typecasting.

I am guilty of making assumptions about class, and maintain that those more financially endowed will have the capacity to produce pieces that those without will not.  However I don't believe money, gender or ethnography solely determine motivation, influence opportunity or affect the impression an artist makes. As Snyder observed when he visited us recently, Australia has developed its own culture outside of the American context, for example.

So getting back to Black Mark's question, why are women attracted to paste ups, I can't answer without getting an uncomfortable tightness in my throat, and without saying that (1) you cannot assume the gender of the artists to which he has referred, (2) you cannot assume that it is all that they do and (3) his selection is not a current depiction of who is doing what. 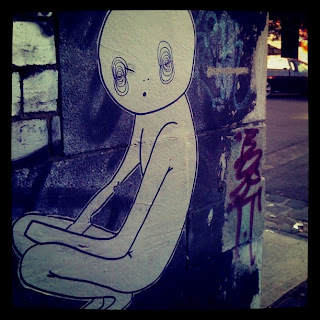 Barek, above - whilst alas he resides so far away, his creatures have brightened Fitzroy when opportunity has arisen.  Below, whilst not currently proliferating, Flake with his offsider Durban Poison have pasted awesome large scale images 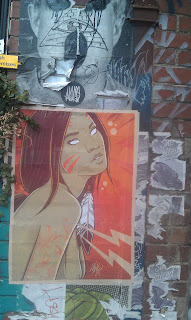 S-701-a and Ruskidd continue to do amazing things for us using amongst other mediums, the trusty paste up 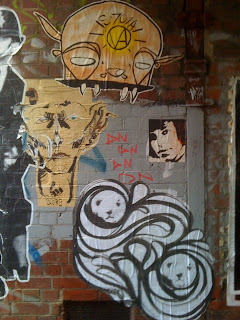 Vandal Spruce once famously covered this building below in skulls.  He is joined by a few newer artists, such as Noican.  Gender not identified. 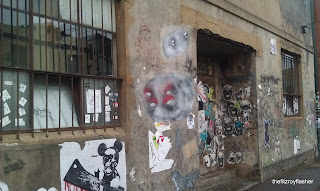 Above Precious Little, a Snyder 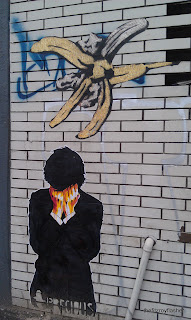 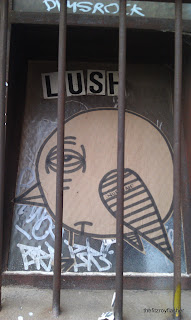 Above, one of my all time favs Nufevah, below him Burg, gender not assumed 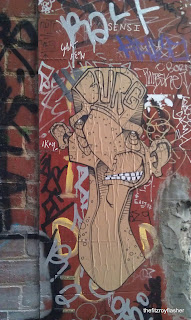 Below, a chick with an aerosol erection, and a hot tag 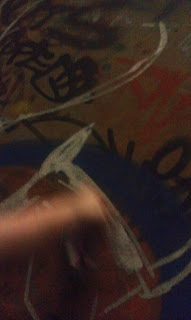 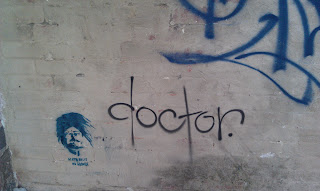 And below, perhaps the paste up artist of all street artists, Rone 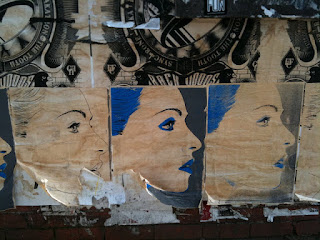