There is Freedom Within and Bras on a Mountain. For Mr Naz

The radio dolls out good Aussie lyrics. Hey now, don't dream it is over. There are bras on a wire, and leaving here even the mist feels good.  I am on a winding road between mountains. I am in the cloud.

I think of Ben, death and life in that order and suppose that knowing what death is probably defines life, the way that happiness is given meaning by knowing sadness. They need each other. They oppose and juxtapose. The relationship is explainable as a tangible physical quality but remains impossible to put your finger on.

I stumble awkwardly over unfamiliar terrain and lazy metaphor here. But seriously, today, of all days, there are bras on the mountain. Like stencils in the face of adversity, and morphine at the point of too much pain.  They are just there and they work and I smile. 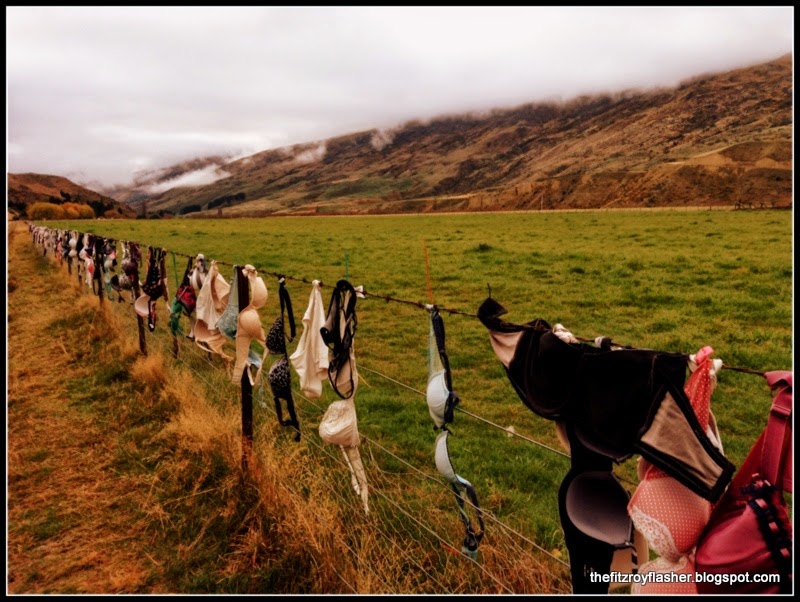 As Atheist as I may be I wonder if maybe 'Heaven' is the knowing created between life and death felt while we are alive. The pause for thought as we drive through the dense fog. Maybe life really is the deluge of memories streaming by, collecting in our paper cups that once full give way no matter how we hold on. Be it one handed, two handed with one underneath, tightly by the rim. It is all we can do just to fill them let alone hold them.

So we come to the end of this journey and look up to see a snow capped mountain, a clear blue sky glimpsed briefly between tinged white fluff. The sky looks out of focus:  fuzzy against solid; clear behind unclear; certain beyond uncertainty. I know I can't see it but I also know it is there.

Post script: I initially tapped this into an iPad on the way down a mountain, thinking of Ben Naz and his brave fight through, over and around oesophageal cancer. I put it out as a rudimentary jotting and have just had a crack and stringing it together properly. In doing so I hope I didn't lose the intent or sentiment. Dedicated to  Ben, Carol and your beautiful boy. You have touched me, opposites on opposite sides of the world.

Posted by Unknown No comments: