Dicknose: I'm that type of guy

I heard a rumour last night that Dicknose died.  On Sydney Road.  I cannot verify this, so I will assume nothing, and give him the shout out I never wanted to before.  I loved to love AND hate his work. I loved watching other people hate it.  However before anyone starts to think about their retort I should warn you that I won't be publishing any defamatory remarks.  This really is a tribute.

Dicknose certainly made an impact and therefore made a contribution to our streets. Far greater impact than some of the 'nice art' ever will.  I first recall seeing his tag here and there in early 2011.  Then suddenly it was everywhere.  I had to post about him.

If Dicknose did anything, he ruffled feathers.  Below is a past comment on my first post about the man:

"Fuck DN. Dude from the states, Hep C, Junkie loser..Probably still living in shitty backpacker hostels after all this time.  I know exactly who is is, and every time I see his shitty fucking tag around, I want to throttle his fucking neck."

I should say that I don't condone criticism of a man because of his Hep C status, nor because of his drug use patterns.  I do love that his tag evoked such vitriolic response, however.  This, I would have to say, was resoundingly DN's effect on people.
I believe Dicknose made contact through my blog just last week.  It may not have been him, but I was tickled by the possibility that it was.  Whoever it was, they signed off as anonymous having found an old post by googling "dicknose graff".  The post was You Sold Our Lifestyle Out. There was a dialogue about Dicknose in the comments on this post.  His response (or at least I believe it to be his response) was this:

"to quote the man himself "anyone that thinks im cutting edge is an idiot, im the type of guy thatll steall your paint fuck your girl and ruin your peice...im putrid" 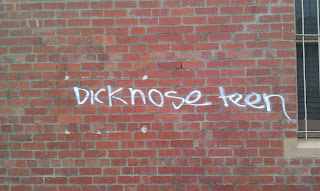 Post script: since writing this piece I have been repulsed by the work of one blogger, if you were unfortunate to have read his post and you are a friend or acquaintance of dicknose I apologise for your experience of that and offer you my condolences. And I refer you to a lovely post by the very smart, wise and fair blogger who has been writing about street art for years, Images to live by.
Posted by Unknown 4 comments: Links to this post