It felt vaguely familiar.  I strode confidently along Lygon St and slid quietly, somewhat optimistically into lanes, over cobblestones hit by sun and cut in half by shade.  All the while I wondered if I might need to pull my passport out.  The differences whilst subtle were significant.  It was a bit like being in a Mall in Hong Kong.  You could almost be at Chadstone but for the occasional Hawker stall.  There were definitely a few more weeds squeezing through the back of yards in Brunswick.  That's where the differences began.  I walked farther and there were backyards created with landscape in mind.  This surprised me.  Odes to the original Eucalypt the new owner couldn't bare to cut down (or perhaps couldn't by Council regulation).  I imagined I would find more Nonna yards full of Heirloom Vegies.  The kind thriving from seeds smuggled in their jacket pockets as they set sail for the promised land.   I know we still have them in Fitzroy, in the North at least.  I believe them to thrive in Brunswick, just not in the part that I found.  Next time...

What I did find that made me feel right at home were some TV Crew tags, some early Doctor, which I wistfully ran my finger along.  Beside this, of course, early Kaff-eine.  I paused and felt a twinge of longing for the good old days.  I also found some figures I did not recognise, which pleased me, because, after all, I had travelled all this way...

Some familiar names, with bold pieces, were probably the highlight of this soiree, alongside the historical Above, Kaff-eine and Doctor of 2010/1.   I found a Snyder (covered splendidly by Melbourne Art Critic and the fabulous Arty Graffarti) split banana, thankfully, so I can now say I have found two.  I digress but rumor has it he will exhibit here soon! 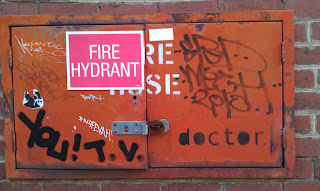 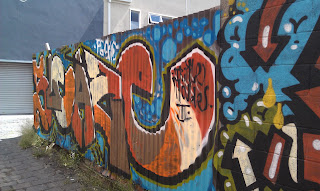 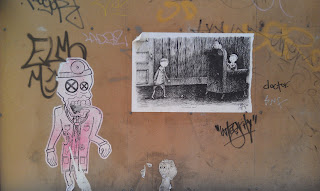 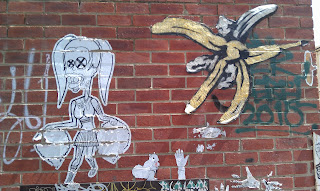 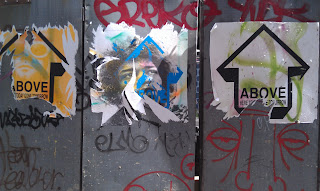 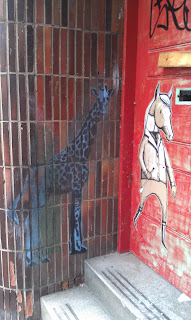 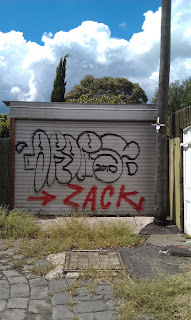 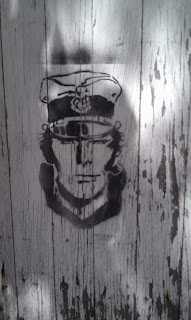 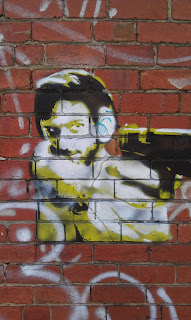