yes, I am going to weave Joan Rivers into a street art post. Playing six degrees to Kevie-B,  I am fishing the Interwebs for Joan - Rivers - Street - Art.

I am not the only one attempting to draw such an obscure and long bow. In my search I came across: New York City Street Art Pic of Kevin Michael with Joan Rivers.  Don't get it excited it is just a photo of Kevin being a Rivers fan. I looked him up, I didn't know who he was and did not want to look like a dick in this post. Turns out he is a Street and Graffiti Art Curator and Documentarian. A fancy paint spotter. The New York Flasher. But who actually runs shows. I think. A very preppy looking arty Flasher curator boy (yes, risking looking like a tool if he is actually famous and you all know who he is).

But getting back to Joan. In 2009 I sat in a theatre on Broadway a row back from her. Our boy Hugh was drawing the likes of Rivers, Bacall, Midler to Steady Rain. She turned when it was over and asked if I liked the show. Yes it was fantastic! I wanted to say "well I struggled watching such famous faces playing New York cops, particularly knowing that Hugh's formative years were nothing like this" but as I came back from that Nina dream scene she had already moved on. I realise it was just part of the routine, she wasn't actually interested in whether I enjoyed the show. But now I get to say I 'met' Joan Rivers.
Later that night I saw her surrounded by people in the middle of the road, fans bloody everywhere and I thought to myself thank God I didn't gush.

I also saw her giving the bird in Bali (from my Absolut/fuck Mr Brainwash post)... 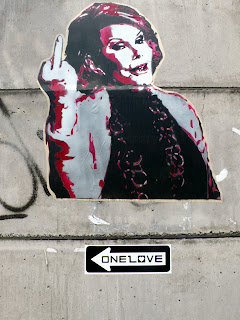 Okay, that is about as long as this bow can get, before you start thinking this is a hack piece. So with that I will say Joan Rivers, good bye, thank-you for the laughs. And I will leave you with these gems: 2. A little on the disturbing side, she apparently lent her name to an Animal Print Graffiti scarf.

3. Not street art but the Huffington post had a sweet blog tribute written by a 17-year-old Kaitlyn Kaminski: My Goodbye to Joan Rivers.

This one is for my lovely Michelle, who has been watching endless you-tube clips since the news hit us.
Posted by Unknown No comments: Links to this post